an intergenerational preschool in St. Johns

Chelsea Brendtro is the owner and lead teacher of MBP.  She has a B.S. in Social Sciences and an M.S. in Early Childhood Education.  Though Chelsea was often told as a child that she should be a teacher or therapist, she entered college with dreams of Broadway and majoring in Theater Arts.  As luck would have it, she applied for a work-study job her first week of college working in the kitchen of the campus preschool (PSU’s Helen Gordon Child Development Center) and the director saw her potential and asked her to work as a student teacher instead.  Chelsea fell in love with the world of early childhood education, changed her major, and was hired as an assistant lead teacher the year she graduated. The following year she attended the Reggio Emilia school study tour in Italy, and spent the next seven years as a lead teacher working in the classroom, training other teachers, presenting at local and state conferences, and earning her master’s degree. 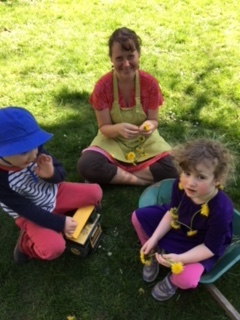 Chelsea returned to full-time work briefly after her son was born, but was inspired to resign after reading Radical Homemakers and fully appreciating the financial, emotional, and physical challenges of working while raising young children.  She spent the next few years building relationships in her own community of St. Johns, providing nanny care to local families, and volunteering at St. Johns Swapnplay, where she served for a year as a member at large of the Board of Directors, followed by three years as the Board’s President.

When Chelsea’s son entered kindergarten, she decided to get back into the classroom and found the perfect fit with MBP.  Her son attended a LifeWays preschool, and her values align well with that model and intergenerational education. Two years later, the original owner, Marguerite, was ready to move on and Chelsea jumped at the opportunity to purchase the program and continue Marguerite’s work bringing together the very young and the very old.  Chelsea is passionate about spending time in nature, environmental justice, animal rights, social justice, and community-building.  Chelsea is a stillbirth survivor and former foster parent.  She spends her free time baking, wild fermenting, creating and perusing free piles, reading sci-fi, and snuggling her family – a husband, a 9 year-old son, a dog, a cat, and two rats.